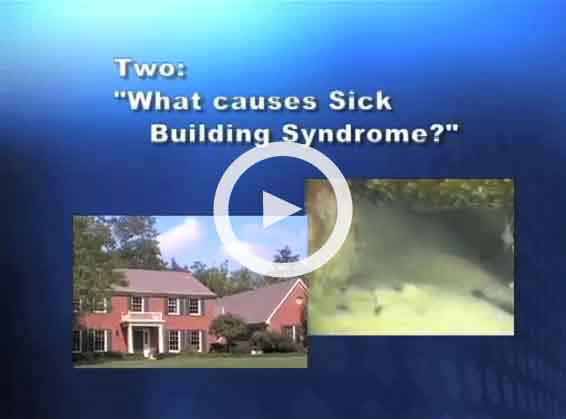 Learn about the series of events that has brought about this serious and widely recognized problem.

The problem didn’t happen overnight. There were a series of events that occurred over time that, added together, contributed to Sick Building Syndrome. Here’s a quick overview. For decades, American households participated in a practice known as ‘Spring Cleaning.’ After a long winter, families wanted to freshen up their homes. Rugs were taken outside and hard wood floors cleaned. Bedding and draperies were washed and hung on the clothesline to dry. Windows were opened, screens put in place, and attic fans pulled in the fresh outdoor air. This simple process allowed months of collected dirt and dust to return to the outdoors. Open windows throughout the Summer months and early Fall allowed a constant exchange of indoor and outdoor air. This tradition began to change with the popularity of two modern home improvements: affordable central air conditioning, and wall-to-wall carpeting. These modern conveniences offered pleasure and style, but created the perfect setting for an unhealthy indoor air environment. No one could have foreseen what would follow these advancements. Families loved the natural dehumidification that accompanied air conditioning, so windows and doors stayed closed throughout the Summer. The same air was re-circulated over and over and the air pollutants had no way to escape. About this same time, Americans fell in love with their wall-to-wall carpeting. Where once the oval rugs and orientals would be taken outside and cleaned, the new permanently installed carpet stayed in place year after year. The thousands of nylon loops that make up carpeting are a perfect collection and holding area for dust, dirt, hair, insects, pet dander, and dozens of airborne pollutants. To make matters even worse, more and more household products became available in aerosol cans. Molecules of cleaning solutions, insecticides, non-stick cooking oils, hairspray, and deodorants were sprayed into the air and added to the dirty mix of dust and dirt. In the early 70’s, the cost of energy skyrocketed, and America’s attention turned to finding ways of conserving fuel. The push for conservation motivated millions of homeowners to plug air leaks, insulate their attics, and add double paned windows- and it worked. Homes became energy efficient marvels, keeping the heated or cooled air tightly confined to the inside spaces. What no one realized: we had also created a perfect environment for a whole new problem. Air was now re-circulated over and over again, and the mixture of dirt, dust, and chemicals, and other contaminants became permanent house guests. This combination of seemingly unrelated events has created indoor air quality problems known as ‘Sick Building Syndrome.’ Now, let’s look at how an air duct system should be thoroughly and professionally cleaned.