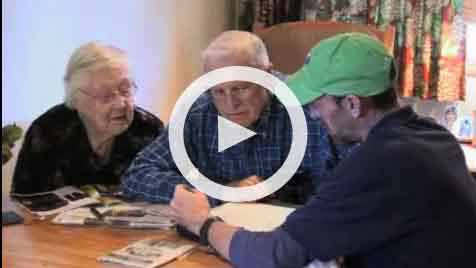 In this first of a two part episode, Dateline NBC exposes the fraudulent sales practices of a Kentucky air duct cleaning company. Dateline NBC correspondent, Chris Hansen and his team enlist homeowner Judy Pruce’s cooperation and set up hidden cameras to capture the actions of the technicians in her home.

DUCT MASTERS TECHNICIAN: (Going over a job invoice with an elderly couple) So we’re at $359.85…

CHRIS HANSEN [Dateline NBC Correspondent]: This air duct technician from Duct Masters in Hebron, Kentucky just turned a $49 promise into a $350 bait and switch. Would it happen again?

JUDY PRUCE [Duct Masters Customer]: I saw an ad in the paper, and I’m interested in having my air ducts cleaned…

CHRIS HANSEN: We asked another homeowner to make an appointment with the same company. This time, 74 year old Judy Pruce allowed us to use her house to see if Duct Masters would finally deliver on the $49 promotion. Here come the technicians [Sean and Tim]…

SEAN [Duct Masters Technician]: Hello, how are you?

CHRIS HANSEN: Sean and Tim [Duct Masters Technicians] have no idea everything is being recorded on hidden camera.

SEAN: We’re put a vacuum on the system…

JUDY PRUCE: Ok! Fine by me.

CHRIS HANSEN: Now alone in the basement, Sean does a quick check- it’s time to deliver some bad news to Judy. She’s got soot…

CHRIS HANSEN: …and he says- Soot Is Trouble. But fortunately he tells her it’s not hopeless.

SEAN: The other option that you could take, and I know that this is up, completely up to you…

CHRIS HANSEN: Sean says he’s got a chemical with him that will keep soot from blowing around.

SEAN: It’s a polymer sealant. Ok, it will go inside the duct system and actually seal everything…

JUDY PRUCE: So you can’t honor that?

SEAN: I can’t do anything about that.

JUDY PRUCE: You can’t do anything… so that’s- I can’t read that- four hundred?

JUDY PRUCE: Long as I get a guarantee. Ok, thank you very much.

CHRIS HANSEN: So Judy waits patiently up in the dining room, while the men go to work- or do they go to work? Downstairs in the basement, Sean doesn’t look too busy… Instead of cleaning the air, they were actually blowing the dirt throughout the house, even around Judy’s head.

CHRIS HANSEN: That’s when Judy gets curious, and heads downstairs.

JUDY PRUCE: Whew! Oh goodness gracious what is that?

JUDY PRUCE: (Coughs) Yes it is!

CHRIS HANSEN: She pays almost $500, and the job is done. But did she at least get what she was promised? Remember, Sean told Judy he needed to make two access panels to add the chemicals- but watch this. He did make that first hole, but as for the second, all he does is attach a metal plate to the the duct. There’s no hole, he’s just trying to make it look like there’s one. And how clean are the ducts themselves for all that money? Remember, these were her air ducts before (shot of clogged ducts). These were the same ducts, after they left (shot of ducts still clogged). No difference!

DATELINE EXPERT WITNESS: This woman, in my opinion, just got jacked. It is amazing how unscrupulous some people can actually be.