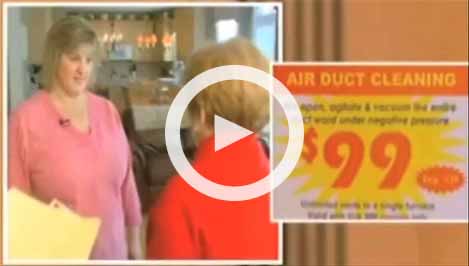 ROB JOHNSON [CBS 2 Chicago News-anchor]:
They promise to clean your air ducts, and make your home healthier and dust free, but is discount air duct cleaning a bargain- or another case of something “too good to be true?” Pam Zekman investigates and says “Buyer Beware.”

VIVIENNE SCHWAN:
Yeah, it did.

PAM ZEKMAN:
You’ve probably seen the special deals and ads like this, warning about health hazards associated with dirty air. This one prompted Vivienne Schwan to hire American Pure Air. This $99 deal turned into what?

PAM ZEKMAN:
Once they got inside her house, one guy started to do some work while another tried to sell her hundreds of dollars in additional services besides cleaning out the air ducts. Schwan agreed to pay $299 for an additional furnace cleaning, which the American Pure Air workers told her she needed- but she was also charged $276 for sanitizing treatments she says she did not want. So these are one, two, three, four different kinds of sanitizers. You didn’t want any?

PAM ZEKMAN:
And Schwan wonders how good a job they did cleaning the ducts. Just six months later, some of the duct covers are still dirty, and her furniture gets dusty just days after cleaning. Did they do all of the vents and all of the ductwork in your house?

VIVIENNE SCHWAN:
They opened up two air ducts only.

PAM ZEKMAN:
That’s just two of the eighteen vents she has on three floors.

STEVE BURNA [Better Business Bureau Director]:
We’re seeing a lot of consumers who are unhappy with the air duct cleaning companies. Their complaints are up 59% over ‘08 [2008] numbers.